On 25-26 June 2010, during the 13th edition of Arte al Centro (Art at the Centre), the annual international festival that focuses on the sphere of art in the ongoing transformation of society, Cittadellarte-Fondazione Pistoletto will be opening:

• 7 p.m. - Tettoia del Mercato space
opening of the exhibition “Practicing Memory in a time of an all-encompassing present” with the performances:
• 7.30 p.m.: 18.900 metri su strada (Il percorso di Pinelli). A performance by Francesco Arena. Written by Luca Cerizza. With the participation of Michele Fusco.
• 8 p.m.: The Istanbul Symphony, by Danilo Correale

• 3 p.m. - Nova Civitas space
working conference of Res.ò, platform of artists' residencies with the participation of national (Fondazione Spinola-Banna & PAV) and international (Platformi Garanti, Townhouse Gallery, Capacete) partners. With the support of Fondazione CRT per l'Arte.
“Visible – Where Art Leaves its Own Field and Becomes Visible as Part of Something Else”

visible is a research project in contemporary art that has been undertaken by Cittadellarte-Fondazione Pistoletto in collaboration with Fondazione Zegna.
visible brings to light and gives strength to artistic practices that have a real capacity to test and produce visions that can impact the contemporary social and cultural imaginary.
visible’s first outcome is an editorial project developed in collaboration with nine curators to showcase 41 ways of making art, that not only address topical contemporary issues, but also intervene directly to spark processes of change. The visible editorial project will focus on artists who emerge for their capacity to deal affirmatively with the need to develop new economic models, the distribution of resources, the accessibility of information, the urgency to rethink ecology and landscape issues, the potential of differences and the development and experimentation of participatory and democratic political models. It is being premiered at Arte al Centro on 25-26 June and in the exhibition for the Ermenegildo Zegna Centenary within the Triennale di Milano, which opens in Milan on 21 June 2010.
The book, published by Sternberg Press - Berlin, will be available in the bookshops from June 2010.

The methods that lead to the creation of memory have historically been based on the process – whether individual or collective – of the creation of images. Ever since Aristotle’s writings on the subject, we can perceive how giving order to memory is described as an externalisation of a thought process through images. Exercising memory inevitably involves and is associated with the potential for writing that is inherent in history. In the hierarchy of fonts, the written word has always been the ultimate medium through which the past can be handed down. This was certainly the case until the responsibility for documenting history passed from the hands of historians into those of the mass media. The so-called democratisation of history has changed the mechanisms involved in building up memory, introducing yet greater problem areas into the question of the past. This is especially true in Europe, where memories of the world war have in many cases not been subject to collective re-examination, even leading to talk of a “planned loss of history”.
In a scenario in which national narrative, and application of this narrative to the present, has been replaced by theoretical global constructions of memory consisting of media events and their collective emotional influences, what impact can the work of artists have on the mechanisms of memory and forgetfulness? How is it possible to create short-circuits in the flow of contemporary history, which is dominated by the process of deletion that is required by the blindness with which we read the present?
Practicing Memory is thus an on-going work on memory through diverse art forms, bringing them out from the fetishist logic of production through an idea of nostalgia, in order to assert their involvement in current social processes with both memory and amnesia. 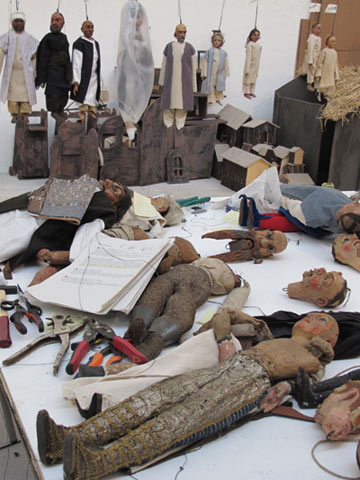 Wael Shawky, Cabaret Crusades: the Horror Show File, installation view 2010
Contemporary Myths, an exhibition by Wael Shawky, focuses on the latest work: Cabaret Crusades: The Horror Show File.
On this occasion Cittadellarte - gallery is the venue not only for the film but also for a display that illustrates some aspects of the complex production process that took place in Cittadellarte and Egypt during the months leading up to the show.
Cabaret Crusades: The Horror Show File offers a view of the history of the Crusades, retracing events which unfolded over a period of four years (1096-1099) and which played a key role in subsequent historical developments, shaking to the core the Arab world and its relations with the West.
The film is a translation of causes and effects of the religiously sanctioned military campaigns in the form of images based on a reconstruction of events seen through the eyes of those who had to confront the invasion.
Shawky provides a precise descriptions of the places in Middle East and Europe which formed the backdrop for the early Crusades.
To bring these episodes alive, he uses highly expressive 200-year-old marionettes from the Lupi collection in Turin. They are moved by clearly visible strings and don the costumes by the characters who were present in the Christian armies of Europe and in the Muslim armies during the conflicts.
Though the subject is based on historic documents and facts, what emerges is a surreal and mythical atmosphere which blends drama and cynicism, telling a story of remote events that could hardly be more topical today.
The main source of inspiration for this work is "The Crusades Through Arab Eyes" by Amin Maalouf, written in 1986, and thus long before today’s recrudescence of hatred. The book by Maalouf, a Lebanese who lives in France, re-examines the history of the Crusades by going back to Arab historians and their writings, most of which have never been taken into consideration in the West, though he does also turn to some of the most acknowledged Western sources and studies. The historical picture that emerges is at once powerful but level-headed, political but unbiased. The essay gives some insight into the historical cruelties perpetrated in the name of a vague feeling of religious humiliation, but more objectively one that was carried out for complex socio-economic reasons.
Cabaret Crusades: The Horror Show File is produced by Cittadellarte in collaboration with the Festival Theater der Welt of Essen.
This is the first film of a series focusing on the subject of the Crusades that Wael Shawky will be producing with string puppets.
Cabaret Crusades: The Horror Show File was produced with the collaboration and promotion of the precious 200-year-old collection of marionettes belonging to Daniele Lupi of the Lupi family of Piedmont. This gem of local Piedmontese tradition is perfectly suited for a contemporary and international reinterpretation of events.

From 30 June to 17 July 2010 the international Festival Theater der Welt 2010 presents an inter-disciplinary programme with more than 30 productions working on the interface between theatre, dance, opera, music, visual arts and performance in Mülheim an der Ruhr and Essen. Over 400 artists from Africa, Asia, Europe, Latin America and Oceania take us on a journey around the globe, providing new sensations, surprising encounters and unexpected events.
Theater der Welt 2010 – A Festival of the International Theatre Institute (ITI) hosted by Theater an der Ruhr and Schauspiel Essen in co-operation with the European Capital of Culture RUHR.2010, funded by the Federal Commission for Culture and Media of the state North Rhine-Westphalia, the Kunststiftung NRW and the Federal Commissioner for Culture and Media.
www.theaterderwelt.de
When?
Where?
Subscribe to the newsletter