For the 15th edition of the yearly review Art at the Centre, centred this year on the relationship between art and urban transformation, Cittadellarte will be opening in its spaces: 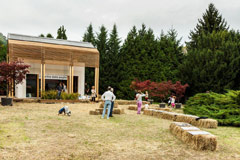 The objective of the project is to examine and experiment the constructive technology of rice straw through the realization of a pavilion built with straw bales. This intervention falls into the area of development of new architectural technologies, with particular attention to social, economic and environmental sustainability.
(Unidee Space - Sale Auliche - Sala Performance | from October 5th to December 30th 2012) 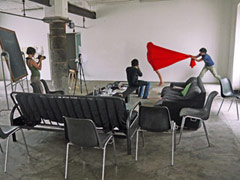 Since 1998, Cittadellarte-Fondazione Pistoletto organizes UNIDEE in Residence International Programme. UNIDEE (further information on the blog of Unidee2012) is an interdisciplinary program, open to all the creatives, from visual artists to cultural operators, from designers to researchers, to anyone working in a creative way on the theme of social responsibility. UNIDEE explores the relations between Art and Society and encourages artists and creative people to become activators for responsible change.
The residency culminates in UNIDEE in Progress - Open Studio, where the residents show their "work in progress" developed during the four-month stay. UNIDEE in Progress focuses on the process of feedback, and promotes interaction and dialogue between participants and visitors.
UNIDEE 2012 - Artists in residence in Cittadellarte: Ayman Alazraq (Palestine) | Lindsay Benedict (USA) | Angela Henderson (Canada) | Dina Karaman (Russia) | Karl Logge (Australia) | Hektor Mamet (Switzerland / Poland) | Alecia Neo (Singapore) | Marta Romani (Italy) | Shah Zaman (Pakistan) | Meghna Singh (India)
Research project curated by Cecilia Guida
Coordination and concept by Juan Esteban Sandoval and Paolo Naldini
(Museo del Presente | 5 October - 30 December 2012) 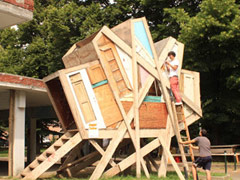 ARTInRETI is dedicated to the topic of art in the social context with the aim at stimulating deep insights into the concept of transformation, a term so abused to have become vague and confused. What does transformation mean? Who are the actors that carry out the transformation? What is the role of art? Can art interact with other forms of knowledge? How can artists activate transformation processes? The projects, the actions and the researches shown in the exhibition suggest answers to these questions, critically and problematically investigating the sense of responsibility of the artist that decides to work with the public space, the instruments he has to tune in with the needs and the habits of a community, the experimentation of participative methods, the chances of impacting the territory the intervention has.
ARTInRETI refers to both the establishing of a network of institutions and independent associations – some historical, other younger – which have been operating in Piedmont with particularly significant past or current projects, and the networking activities with different subjects, situations and realities required or determined by the development of the projects themselves. Networks born from dynamics of horizontally expanding relationships, visualized on a wall of the exhibition space in the form of a constellation.
ARTInRETI comes from an idea and an action of establishing a connection among artistic practices whose activators – artists, curators, cultural actors – share the same vision and the same questions about the sense of art and its social function today. In spite of their variety and their differences, the projects in the exhibition remind one of the other in their modalities and their objectives, in a continuous interconnection which creates a common communicative “environment”. A network that, in respect of the uniqueness of its participants, presents itself as a “critical mass” present and active in the territory, able to have a dialogue with the public administrations for the proposition and the discussion of valuable cultural politics.
As the subtitle says, the exhibition focuses on artistic experiences from Piedmont, because this region, first among all and for several years, has promoted theoretical thinking and innovative planning on the relationship between art and public context. However, it is the first step of a bigger cultural project, whose content is still in fieri, aiming at going beyond the regional dimension and, moving centrifugally from Piedmont, becoming a permanent observatory on the relationship between artistic practices and the urban transformation in act in our country. 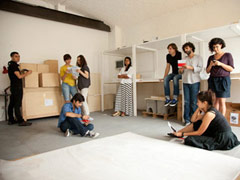 FRAC Piemonte, born in 2007, is a unique and innovative choice that puts Piemonte Region as an avant-guard in Italian cultural policies that support contemporary art. The Fund is finalized at purchasing of works by international young artists who have been selected to take part in Artissima, the international fair of contemporary art in Turin. The Fund is aimed at making the public, and in particular the younger generations, aware of the new trends of contemporary art, through a cultural and didactical activities program. Since 2011 Frac Piemonte has in Cittadellarte - Fondazione Pistoletto a permanent base for preservation, storage and exhibiton.
How does contemporary art speak to the spectator? Who is the spectator? How can you share creative processes with a community? What is a community? How can you make an artwork resound beyond the world of the circuit galleriescollections- art fairs? What is the role of an art institution engaged with a “responsible transformation” of society?
For the third time, the collection of the Fondo Regionale per l’Arte Contemporanea (FRAC) of the Piedmont Region is exhibited in the Fondazione Pistoletto. Starting in June 2012, this year’s curator Lucrezia Cippitelli, together with the residents of UNIDEE, began a process of unpacking the collection, asking questions to reinterpret and rework the works themselves. This critical approach continued further questioning the role of contemporary art at large, focusing on how to extend the potential of a given work to wider and different audiences, and to reconceptualise how works are read by the usual suspects.
Deconstructing a standard curatorial system which generally organises selected artworks under a predefined theme – as an act of induction – this year’s FRAC e xhibition h as b een d riven b y a collective practice of dialogue and interpretation. The result is a curatorial perspective developed as deduction: after a deep cooperative analysis, the selected works emerged as a necessary choice, linked to the research of each individual of the curatorium but joined by a quest for a connection with wider social contexts.
The final selection of artworks converges under the subject “Memory and place disclosed”. Memories and places are the fragments of stories and history which artists like Kuśmirowski, Campbell, Oppenheim, Buche (and others) explore and narrate in their works. Disclosure refers to the open process of collective interpretation of these works and to the attempt to share them with a wider public and in multiple ways. Place disclosed also unpacks processes of reenactment, where elements of the FRAC works become part of, or fuel for, the creative process of the residents of UNIDEE.
Memory and place disclosed presents the act of disclosing and upacking as an exhibition, merging works of the FRAC collection, works of UNIDEE residents and a documentary revealing this complex process.
FRAC Artists: Lara Almarcegui, Tobias Buche, Duncan Campbell, Sam Durant, Jimmie Durham, Robert Kusmirowski, Lisa Oppenheim, Reena Spaulings.
UNIDEE residents 2012: Ayman Alazraq, Lindsay Benedict, Angela Henderson, Dina Karaman, Karl Logge and Marta Romani, Alecia Neo, Meghna Singh .
frac-lab: Ayman Alazraq, Lindsay Benedict, Angela Henderson, Dina Karaman, Karl Logge, Hektor Mamet, Alecia Neo, Marta Romani, Shah Zaman, Meghna Singh.
Conceptual design: Dina Karaman
Documentary: "Back to the people", directed by Ayman Alazraq
further information about UNIDEE in Residence
Exhibition curated by Ana Džokić and Marc Neelen (STEALTH.unlimited) and Juan Esteban Sandoval (Cittadellarte)
(Museo del Presente | 5 October - 30 December 2012) 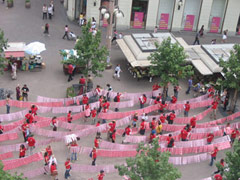 It has been predicted that the city will be the terrain where the new conflicts in society will become visible - and ultimately, will get settled. Speaking (not only) from a European perspective, at least during the last decade leading up to the 2010s, the economic bubble has obscured much of the ruptures and breaks that have appeared in society, pushing them to the underbelly of our everyday life. The conflicting results of shifts in political tendencies and economic modalities, demographic changes and other factors that define the relations of citizens have thus been boiling for many years in an undetermined societal no-man’s land; a vague terrain left open by the lack of a horizon of where to go after the socio-economic makeover of modern society broke down in the 1980s and 1990s. The abrupt end of this bubble in 2008, first manifested as a crisis of home-ownership, and currently as a sustained economic crisis, has not only shattered the illusionary possibility of individual advancement (in short: a better life) without the need for collective investment, it has actually brought the hardship directly to the foreground in many key aspects of urban life - and our cities: the foreclosures and difficulty for many to maintain their housing situation in the city, the increased competitiveness and loss of jobs, the cuts in collective budgets which make basic issues like healthcare increasingly unaffordable, and much more. Everyone who takes a look around will see a hardened, and less solidary society. But equally, in the very breaks and ruptures becoming visible, we can recognize here and there the appearance of new attempts, new initiatives, new approaches, sometimes difficult to grasp, as they defy many of the existing and exhausted polemics or ideological trenches dug over the last decades.
A significant time, not in the least for some of the organizations, groups and initiatives from the field of art and culture that set their mission to experiment or provoke a necessary change in society. Over the last years, some of them have taken their focus beyond the cultural domain, and have started impacting urban life - this time for real, and increasingly hands-on breaking the ground to sometimes literally build the elements of a new society. For Cittadellarte, having positioned “art at the center of social responsible transformation” for more than a decade now, and having investigated the potential of extensive urban engagement with, for instance, last year’s “art for urban (re-)evolution” at the core of the urban festival Evento in Bordeaux, exploration of such approaches and fostering strong ties with other initiatives and organizations that show their commitment in this field is indispensable.
The exhibition A Life in Common looks at seven k ey a spects of urban life, and examines some of the breathtaking, daring or sometimes just provokingly pragmatic ways in which art and culture can re-define our city, in terms of how we live (housing), how we produce (economy), the resources we have at hand (food, energy, water...), the new civitas (citizens, migration), and the politics of the city (collective decision making) among others. It does not just highlight the motives and potential of this commitment, but also looks at some of the questions that go hand in hand with this: are we witnessing here a short-term patching of the inconsistencies of our societies, or are we looking at a long-term redefinition of what art and cultural operators are involved with and equally, how far can their capacity in this respect reach?
Participants: Van Abbemuseum (Eindhoven), Pravo na Grad - Right to the City (Zagreb), Stroom Den Haag (The Hague), Macao (Milan), Row Houses Community Development Corporation (Houston), aaa (Paris), Smári McCarthy / IMMO (Reykjavik)
Friday October 5th 2012
6:00 p.m. official opening of the exhibitions and awarding of the Minimum Prize to the artist Jeanne Van Heeswijk

Editor: Luca Furlan
When?
Where?
Subscribe to the newsletter