Skip to content
The Mediterranean Carpets
concept Michelangelo Pistoletto & Love Difference
In 2009, Michelangelo Pistoletto and Love Difference created new symbols of meeting and creative cooperation: The Mediterranean Carpets, spaces of relation, sharing and dialogue. The carpets become the nomadic symbol of the Mediterranean Cultural Parliament, a tool of meeting and common action for free and responsible people.
For the realisation of the project, Love Difference involved the Gudran Association for Art and Development. The first Mediterranean Carpets were realised by the artisans of El Max, the small fishing village on the peripheries of Alexandria, Egypt, home of the Gudran Association, through a series of creative workshops that have deepened a reflection on the theme of the Mediterranean Sea as a common place.
The design of the creations is by Aliaa El-Gready and combines the ancient and modern techniques of artisans with different materials, defined from time to time by the participants of workshops.

These first ten creations were presented in 2009 at S.O.S 48 – International Festival of Sustainable Artistic Events of Murcia (Spain), an event curated by Jota Castro, and then at the Centre International d’Art et du Paysage, Ile de Vassivière (France) within the exhibition Love Difference Pastries curated by Chiara Parisi and at the first Circolo Love Difference at Palazzolo S/0 (Brescia) in collaboration with Osteria La Villetta, Palazzolo.

On the occasion of the Festival of Creativity of Florence, in 2009, a new Mediterranean Carpet was realised through a workshop, curated by Love Difference and Gudran, who involved the public in the event.

All the proceeds of the Mediterranean Carpets go towards sustaining the activities of Love Difference and Gudran.

Love Difference has collaborated with Gudran since 2005. Together they have realised different workshops on the diffusion of participatory creative practices for the good of the community, like CoDex at Tunisia as part of the World Summit of Information Society of ONU, As_Tide at the Marsha Open Center of Malta and on the occasion of the Biennale of Young Artists of Europe of the Mediterranean, at Biella and Bari. The Mediterranean Carpets represent the first common project of participatory workshops. 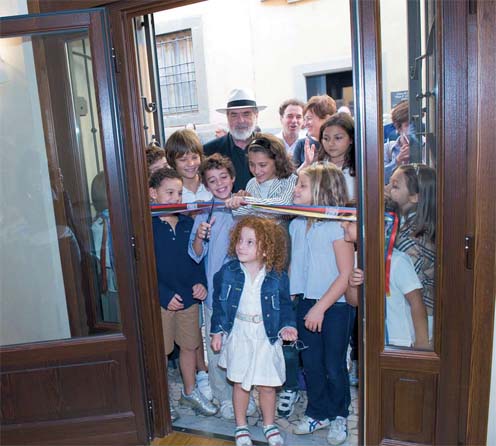 CIRCOLO LOVE DIFFERENCE IS A PLACE TO PROMOTE ARTISTICGASTRONOMIC PROJECTS TARGETED TOWARDS A DIALOGUE BETWEEN CULTURES AND THE ESTABLISHMENT OF NEW FORMS OF ENTERPRISE
In the 2009, at the Centre International d’Art et du Paysage di Ile de Vassivière (France) the Carpets became patisseries, places where to appreciate the taste of difference. If the understanding of others comes mainly through the senses, then even an aroma, a flavour, and experience perceived through the taste buds, can lead to the discovery of other cultures, sharing and exchange. Food is the sweet part, the pleasure of exchange. In a time that more than ever has opened up the frontiers of communication, Love Difference shares its culinary wealth, to freely redefine it through relation and dialogue. On the carpets, the Mediterranean is the course to tangible and edible meetings.

At S.O.S 48 – the International Festival of Sustainable Artistic Events in Murcia (Spain), an event organised by Jota Castro, the Carpets were the nomadic symbols of the Mediterranean Cultural Parliament, founded in 2008 by Michelangelo Pistoletto and representatives of illustrious Euro-Mediterranean artistic institutions whose aim is to encourage the production of art works as the basis of a new culture of peace and solidarity between people. Art is at the centre of the Mediterranean Cultural Parliament and provides the tool for acting together to reach a common and shared understanding within the Mediterranean region. 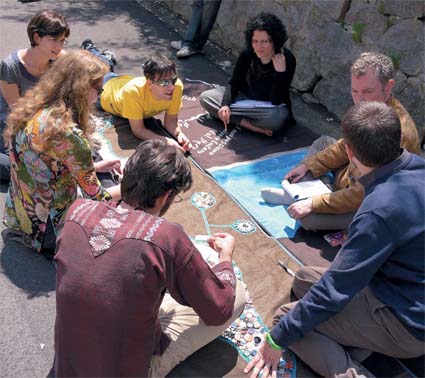 The Gudran Association for Art and Development was created in 2000 by two Egyptian artists, Aliaa El-Gready and Sameh El Halawany. It is composed of a group of painters, musicians, and theatre and cinema actors, motivated by the social responsibility of placing art in contact with everyday life.

The aim of Gudran is to develop the sense of “east-ethics” in society, a sense that is interested in the rapport between people, relations, research on ethics of a community and its possible improvement. The artistic activity of Gudran began in the small village of El Max, at one time an abandoned suburb of Alexandria, Egypt, a zone of strong social unease, with low levels of education and sanitation, and today thanks to the many actions of Gudran, a habitable quarter in which a new social peace reigns and where the other and public spaces are respected.
The workshops are the tools with which Gudran involves the community of El Max in the project of re-qualification of the territory, a design for regeneration made up from the cause of individual creativity. Each workshop assumes the function of activator of social responsibility of the individual, allowing the understanding of the element of transformation embedded into the creative process.
The artistic workshops which Gudran organises (ateliers of crafts, events in the cafes, free software courses) generate important effects on the social life of the village: valorising the specific abilities of the individual, redefining the equilibriums and the social roles of categories that are seldom considered - such as women and children – and opening important access points to development.

Other than laboratories and workshops, Boustashy-Urban Scenography is curated at El Max, an international artistic symposium, in collaboration with other groups of artists from different parts of the world, organisations and associations. These big events, from the first edition, have involved the young people of El Max at all organisational and developmental levels, giving them the necessary professional skills. A recurring theme in the interventions realised by Gudran, by the artists and participants of Boustashy is the wall: the walls of the rooms become collective palettes on which to draw the dreams, projects and the daily life of El Max. These creative interventions determine an important effect of regeneration and re-appropriation of the common spaces. “Boustashy – explain Gudran’s organisers – presents to the general public, the life of the community of El Max. The inhabitants of the village find themselves under the reflections of diverse means of communication, such as radio, newspapers and television. This enhances their level of self-esteem, making them aware of wordless creative energies and of the importance of collective work for general development”.

The project has allowed a growth in awareness of how necessary it is to open up to others and to differences, in order to overcome the tendency towards conflict. To know the other, to overcome the stereotypes of foreigners, contributes to the improvement of the social state of the community of El Max.
At the Florence Festival of Creativity in 2009 a new Mediterranean Carpet was created during the workshop “Infinite Weaves – Making a Mediterranean Carpet Together”, organised by Love Difference and Gudran, in the deGustiBooks space at the Fortezza da Basso. An ample and enthusiastic public was called to reconstruct the shape of the Mediterranean through the emotions and sensations inspired by the sea itself. Comfortably seated together, children, teenagers and adults took part leaving their personal messages on the carpet. 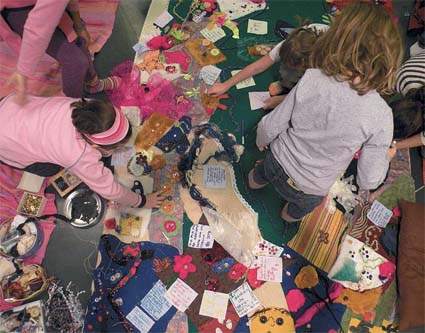