2013 Visible Award
public jury at the Van Abbemuseum
Van Abbemuseum – Eindhoven, 14th December 2013
Visible is a project by Cittadellarte-Fondazione Pistoletto and Fondazione Zegna
Curated by Matteo Lucchetti and Judith Wielander
The winner of the 2013 Visibile Award 2013 is Ahmet Ögüt with "The Silent University". 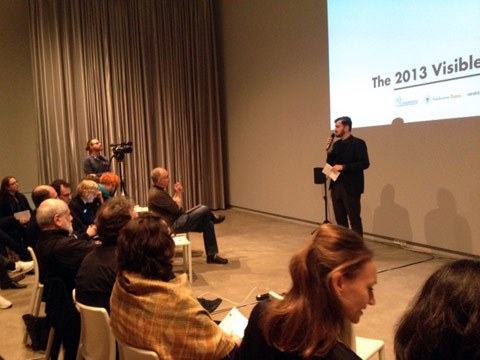 2013 Visible Award: the jury as a public event
The 2013 Visible Award, on the occasion of its second edition, evolves its format, seeking an innovative approach that passes through a more transparent methodology around its jury session, which in this edition will take the form of a public event at the Van Abbemuseum in Eindhoven, The Netherlands.
The jury session will not only be a debate between experts, in order to select an exemplary socially engaged art project, but rather a moment for sharing knowledge and collective learning, that in the process of assessing the winning project, will hopefully create an opportunity to put at work the vast network of professionals existing around the Visible project, that so far connects 45 curators, over 200 artists and 30 independent art spaces across the globe. 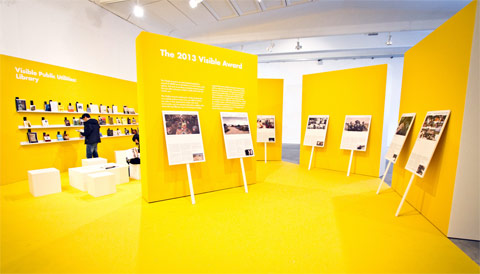 Visible. On Display, Cittadellarte-Fondazione Pistoletto, from October 5th 2013
On the 14th of December 2013 a prestigious, interdisciplinary jury, chaired by Charles Esche and composed of a group of intellectuals operating in different fields of culture, will gather together in order to assess the merits of the artistic projects and select the winner of the 2013 Visible Award.
The invited members of the jury are:
Tania Bruguera (artist, New York), Joseph Grima (architect, writer, former editor of Domus, Milan), Jeanne Van Heeswijk (artist, Rotterdam), Koyo Kouho (curator, Artistic Director of Raw Material Company, Dakar), Nikos Papastergiadis (contemporary social-cultural studies professor, Sydney) and Michelangelo Pistoletto (artist, Artistic Director of Cittadellarte, Biella). A sixth member of the jury will be represented by the vote of the audience who will gather at the Van Abbemuseum for the event.