Skip to content
“A/R The Venus of the Rags in Lampedusa” by Michelangelo Pistoletto, Lampedusa, 30 September / 2 October 2016

A/R  The Venus of the Rags in Lampedusa  by Michelangelo Pistoletto  curated by  Francesco Saverio Teruzzi and Lorenza Lorenzon  Lampedusa, 30 September / 2 October 2016       During 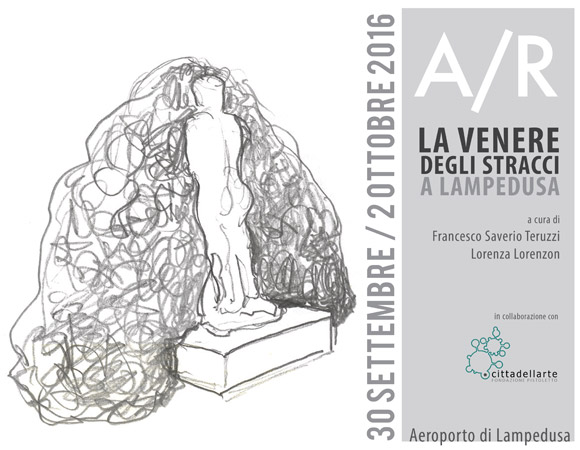 During the 68th Prix Italia, organised by the Italian Radio and Television Broadcaster Rai (Rai Radiotelevisione Italiana), Michelangelo Pistoletto’s Venus in Rags (1967) once again serves as an opportunity to reflect on today’s pressing ethical-cum-political issue of migrant flows in the Mediterranean.

After seven years the international Festival, embracing over 90 radio, television and web broadcasters from 46 countries, is provisionally being moved from Turin to Lampedusa – on the very days leading up to 3rd October, National Immigration Victims Memory Day – as a mark of solidarity with this island, which in this crucial time in history represents one of Europe’s “hottest” borders.
For the first time outside of a museum, the Venus – a work, symbol of Arte Povera and a cultural icon of contemporary consumerism – greets, inside the perimeter of the Lampedusa airport, leading figures from the news world so as to give a message to the entire continent, one which is not intended to be either passive or fall on deaf ears.

The essence of the radical renewal of the artistic language undertaken by Pistoletto, not only in an aesthetic but mainly social sense, is to be found in his output in the Sixties, in episodes such as the Mirror Paintings (1961-62) – highly polished steel mirror plates onto which the artist attaches life size figures using tissue paper – Minus Objects (1965-66) and the urban performances of Zoo (1968). There followed relentless research work which, later, starting from 1989, comes together in work that forms part of the Art Sign (1993) series, of Art Project (1994) – a manifesto in which art is assigned the task of capturing every social issue – the birth of the Cittadellarte-Fondazione Pistoletto (1998), which, on placing art at the core of responsible social change, completed the four year project prior to, although mainly anticipating, the artist’s most recent work: the Third Paradise, a sign that is a symbol of change.
A research destined, therefore, to overcome the boundaries between artistic doing and life, an art that is an allegory of essential phases speaking of our time, of the time for a work’s conception and creation.
This also applies to the Venus of the Rags (1967), a desecrating manifesto, part of the protest of the late Sixties. A provocative arrangement in which the use of scraps such as rags – initially used to polish the Mirror Paintings – is here a crucial material and chromatic component applied to capture the beauty denied by a cast, glimpsed from behind, of the Venus with the Apple by the Neoclassical Sculptor Bertel Thorvaldsen (Louvre, Paris). With irreverence, ideal beauty contrasts with the daily reality of the journey ending with a renaissance of the rags, newly taking shape and colour thanks to Venus.
“But the rags are not fabric, they are clothes. At least one person has been inside each rag. Therefore it is permeated with humanity, with everything that humanity has lived and there it remains. And Venus regenerates the end”.
A poetic legacy, from which though voices sturdily rise up in protest against the present-day drama in the Mediterranean. The Venus of the Rags is on the island in search of energy for her “rebirth”: a search aimed at crossing the border between art and life – an approach which has constantly been adopted by Michelangelo Pistoletto – so as to make a contribution towards Welcoming Ashore and awakening Rebirths.
The artist’s is an appeal to assume one’s own responsibility in society in building a collective and broad memory of the Mediterranean, with Lampedusa at the centre not only of migration, but also dialogue, relations, cultural and well as humanitarian bridges.
A/R The Venus of the Rags in Lampedusa
by Michelangelo Pistoletto
[PRIX ITALIA RAI 2016, Historytelling, now]
curated by Francesco Saverio Teruzzi and Lorenza Lorenzon
30 September / 2 October 2016
Lampedusa Airport / Contrada Cala Francese, Lampedusa e Linosa (AG)