Skip to content
Michelangelo Pistoletto “One and One makes Three”, the exhibition at the Abbazia di San Giorgio Maggiore in Venice, Collateral Event of the 57th International Art Exhibition – La Biennale di Venezia 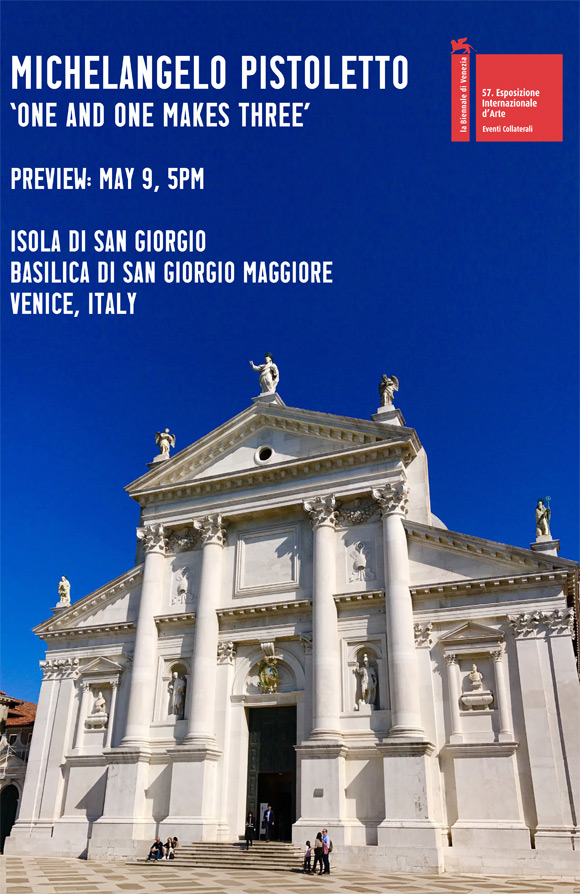 In the centre of the basilica of San Giorgio Maggiore, Pistoletto presents Suspended Perimeter – Love Difference, an installation comprising a series of “suspended” mirrors that form a circular space. The work stands as a kind of opposite altar, with the mirrors mediating between the visible and the nonvisible, extending vision beyond its normal faculties, expanding the features of the eye and the capacity of the mind, to the point of offering us a view of totality. Installed in a consecrated space devoted to prayer and worship, it acquires a renewed force, opening up reflection on the most delicate issues facing humankind in the contemporary world, such as the conflict between religions, the acceptance of differences, multiculturality, but also the role art can still play in creating common ground for mutual engagement.

According to Pistoletto, the evolution of human society has reached a point where it is necessary to assume the maximum responsibility and commitment. In Il Tempo del Giudizio (The Time of Judgment), on view in the Sala del Capitolo (chapter room), the four most widespread religions in the world – Christianity, Buddhism, Islam, Judaism – are each prompted to reflect upon themselves in a moment of radical selfconfession. Each religion is represented by a symbolic element placed in front of a mirror: a statue of Buddha, a prayer mat facing Mecca, a kneeler. The exception is Judaism, presented as mirrors in the form of the tables of the law. “‘Art takes on religion’ means that art actively takes possession of those structures, such as religion, which rule thought; not with a view to replacing them itself, but in order to substitute them with a different interpretative system, a system intended to enhance people’s capacity to exert the functions of their own thought”, declares the artist.
Each of the works in the complex exhibition project has its own story, its own memory, in a spatiotemporal continuum that does not allow for sudden rifts or fractures. In this sense, the previously unshown DNA spirituale dell’arte (Spiritual DNA of Art) seems to be the genetic transcription of the Third Paradise, one of Pistoletto’s best-known signs, where the natural world coexists with the artificial and technological world, creating a renewed harmony. In the Palladian basilica, the symbol of the Third Paradise ideally connects a mirror with a handprint on the wall of a cave. In his last manifesto, Ominiteismo e Demopraxia (‘Omnitheism and Democracy’), Pistoletto identifies the handprint in the cave as the first work of art: the handprint is not the hand, but its representation, and hence the concept; with the birth of the concept came the origin of human thought. “The mark of the hand is the crossing point between the unconscious animal and the conscious animal, the non-human and the human. Since then, every initiatory act reconfirms and celebrates this primordial passage… We need to find an ethics beyond religions, because we have reached the point where a genuine anthropological mutation has become a necessity. Though the achievements of science and technology are extraordinary, moral and social awareness remains largely extraneous to them. It needs to progress, and to inspire a new responsibility in science”, the artist concludes.
The exhibition also features a series of mirror paintings focused on Cuba: “[…] starting from Cuba to develop a new idea of politics. This is my thought. From Cuba, at a time of pressure and global social crisis, an innovative way of doing politics can be launched. Given the present result, Cuba should not surrender to the only unique model that leads the world. Starting from Cuba we can change the world: it is a prolific ground for experimentation, innovation and change. We are here for this […]. In Cuba has been established a cultural, artistic and scientific platform, on which a policy aimed at the renewal of the whole society can be generated and developed”. (Michelangelo Pistoletto, May 2015, La Havana, Cuba).
Michelangelo Pistoletto
One and One makes Three
Curated by: Lorenzo Fiaschi
Promoted by: Associazione Arte Continua in collaboration with Abbazia di San Giorgio Maggiore – Benedicti Claustra Onlus
with the support of GALLERIA CONTINUA San Gimignano / Beijing / Les Moulins / Habana