The Museo Nacional de Bellas Artes, in cooperation with Galleria Continua and Cittadellarte – Fondazione Pistoletto, presents the first personal exhibition ever presented in Cuba by Italian artist Michelangelo Pistoletto.
The performance that will open the exhibition is emblematic in the career pursued by the artist: a new Walking Sculpture similar to the well-known “Sfera di giornali” (Sphere of newspapers), which was taken out for a walk for the first time, in 1967, along the streets of Turin, will come “after a walk” along the Havana streets in November 25th, 2016. In bringing out of the institutional confines the work of art, “the sphere represents the freedom of movement and the individual participation of each one. […] If a sphere is thrown down a given street to freely roll among people, they will react and they will begin to play with it, trying to push it toward an objective, taking advantage of the opportunity.” In this case the ball is also a “metaphor about the life encounters and of interactions.”
The selection of works included in the exhibition offers a wide panoramic view that presents both some more emblematic historical works of the early stages of the activity by the artist – inter alia: “Autoritratto Argento” (Silver Self-portrait) of 1960, some sculptures of the series “Oggetti in Meno” (Minus Objects), 1965- 1966 or the “Venere degli stracci” (Venus of the rags) 1967-1974, and more recent works. Among the latter, a new series of Mirror Paintings specifically produced for this exhibition venue. 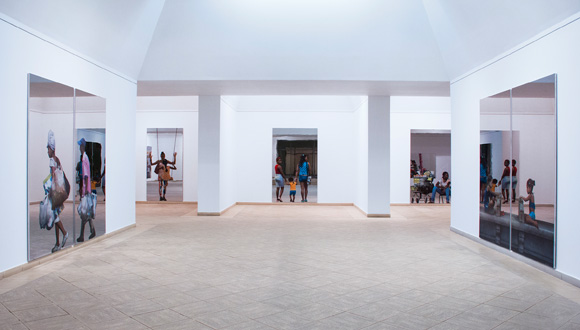 View of the exhibition “Michelangelo Pistoletto”, Museo Nacional de Bellas Artes, Havana, Cuba, 2016
Photo Paola Martínez Fiterre. Courtesy GALLERIA CONTINUA, San Gimignano / Beijing / Les Moulins / Habana
Michelangelo Pistoletto. The Exhibition.
The idea of producing a new series of Mirror Paintings materialized in 2015, during the stay of Michelangelo Pistoletto in Cuba, on the occasion of his important participation in the XII Biennale of Havana, with diverse interventions, performance and conferences. The eighteen new works depict the daily life in Cuba, showing, on top of reflection backgrounds, people photographed on the streets or in common spaces, busy with simple daily activities, without posing for the lenses or with forced gestures.
Another fundamental work of the exhibition journey is “Thirteen Less One” of 2015: thirteen mirrors, objects of the performance by Pistoletto presented during the aforementioned biennale, which at present belong to the permanent collection of the Museo Nacional de Bellas Artes. The artist describes this work as follows: “big mirrors framed and placed all around the room expand the space with a self-reflection on each other thus multiplying the presence of the public. The mirror offers its surface to the real space, as a witness of its self- infinite extension temporal y espacial. When the mirror is smashed by the hands of the artist, its reflective power doesn’t disappear; rather it multiplies in as many times the smashing process creates fragments. The smashing of each framed mirror is like a small explosion that multiplies the reflection particles and it remains exposed as a memento of an exact instant of the unceasingly reflected past in a new present. Each broken mirror is therefore a document of an event that marks a punctual moment in the passing of time.”
Containing the works exposed by semantic groups, both the installation “Mirror Cage – Double Square” 1975-2007, as well as the series of “Two Less One” (Two less one – 2009, “Two Less One Black” – 2011), represent the union between the most recent exploration by Pistoletto on mirrors and that investigation carried out at the end of the 70s named “Division and Multiplication of the Mirror.”
Equally “Buco Nero” (Black Hole) of 2010 as the two polyptychs titled “Vortex” (“Vortex-diptych” and “Vortex-triptych” both dated 2010-2013) can be contained ideally in a single group of works in which light and darkness are alternated in a perfect balance; in such a way that its crisscrossed rotational motives evoke the forms of the Yin and of the Yang. Positive and negative, full and empty, clear and dark are opposed thus conferring these works a physical and metaphysical dimension.
An area reserved for reflecting on the relationship among Art, Spirituality and Politics, which started in the 70s with “L’Arte assume la Relligione”, 1978 and developed until present time in the recent manifesto “Ominiteismo e Demopraxia” (2012-2016) is represented by the large installation “Il Tempo del Giudizio” of 2008, designed as a temple that recaptures the polytheistic concept, gathering in a common space Judaism, Catholicism, Islamism, and Buddhism. According to the manifesto, “with the passing of time, monotheism has carried both, religion and politics, united, to that uprightness that culminates in the absolute, and therefore in absolutism and dictatorship. At present this dictatorship is manifested even in those political structures declared as democratic. Therefore, it is necessary and urgent to extract the vertical power and to replace it with a horizontal praxis of political and social relationships. This is what happens with Ominiteysm, which is horizontally performed in the exercise of the personal and intra-individual responsibility. The term “democracy” has to be reconsidered, to eliminate that concept of power that, although attributed to the people, preserves an atavistic bad habit of dominance. In walking everyday more towards socio-politic balance we are to replace the concept of power (cràtos) with that of praxis, thus ending with the term demopraxis. The work to be done is that of developing good practice.”
If, initially, with the Mirror Paintings Pistoletto has taken “the image to identify from the phenomenological view the space-time”, now, besides the image, it continues working with imagination. Through it, the artist intends to shape the scenario that opens up toward the future, leaving once again opened that tridimensional flow of time that links past, present and future.