Skip to content
The Third Paradise with SPAC3 and the Venus of the Rags by Michelangelo Pistoletto at the HOME Festival in Treviso, from August 30 to September 3 2017

The Third Paradise with the app SPAC3 is on stage at the HOME Festival, that in its 2017 edition hosts also a special version of the Venus of the Rags by Michelangelo Pistoletto.   An app, 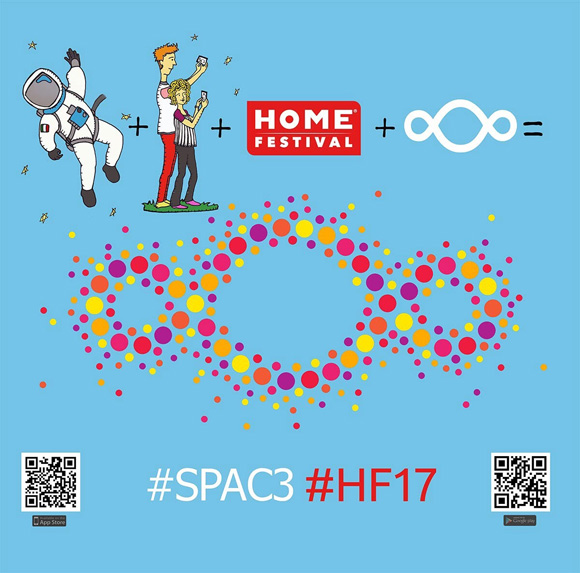 The Third Paradise with the app SPAC3 is on stage at the HOME Festival, that in its 2017 edition hosts also a special version of the Venus of the Rags by Michelangelo Pistoletto.
An app, SPAC3, and Michelangelo Pistoletto’s Third Paradise to launch the HOME among the stars.
SPAC3, developed by ESA (European Space Agency) and RAM radioartemobile in cooperation with ASI (Italian Space Agency) and Cittadellarte – Fondazione Pistoletto, will be the first “social” collective work of art; a dynamic, pragmatic, shared sculpture for a responsible innovation of society. According to themes inspired by the UN’s 17 sustainable development goals, you will be able to combine the pictures taken in space by ESA astronaut Paolo Nespoli, protagonist of ASI’s mission VITA, with your own photographs and the symbol of the Third Paradise.
All the images generated, once shared on social media accompanied by the hashtag #spac3, will become part of a huge interactive mosaic, a social artwork in progress allowing anybody to take part in the global work and feel “at HOME” adding the hashtag #HF17.
www.spac3.cloud
1967 – 2017 the Venus of the Rags celebrates its 50th birthday at the HOME Festival.
A symbol of Arte Povera and an icon of contemporary creativity, Michelangelo Pistoletto’s Venus of the Rags has lived through half a century of history, telling its artistic and social radical innovation and placing art at the centre of a responsible social transformation, as well as ethics as its intrinsic content.
A provocative combination of the idealized beauty of the copy of the Venus with Apple by Bertel Thorvaldsen and the heap of coloured, used, lived-in and worn rags, discarded by a more and more hectic society, the work – in size XXL for the HOME Festival – has been realized through a CALL FOR HOMERS! T-Shirts, trousers, jackets, dresses… bring them to the HOME Festival, they will become integral part of the work.

From August 30 to September 3, the HOME Festival is the biggest italian festival with an international breath. It has been in Treviso for 7 years, Dogana area, every first week of September. Not just a kind of music, but like a true “HOME” is open to all shades.
Awards: "Best Italian Music Festival" Festival of Festival 2012; "Territory Improvement Award" Festival of Festival 2014; Best Festival – Tim Music OnStage Awards 2016; Best Festival – Coca Cola OnStage Awards 2017.
http://www.homefestival.eu/
Keep in touch
FACEBOOK
34791 followers
TWITTER
964 followers
INSTAGRAM
0 followers
Ultimi articoli inseriti sul Journal
Subscribe to the newsletter