What is the Third Paradise?
It is the fusion between the first and second paradise. The first is the paradise in which humans were fully integrated into nature. The second is the artificial paradise, developed by human intelligence to globalizing proportions through science and technology. This paradise is made of artificial needs, artificial products, artificial comforts, artificial pleasures, and every other form of artifice. Humankind has created a truly artificial world which has triggered, in an exponential manner and in parallel with beneficial effects, irreversible processes of decline and consumption of the natural world. The Third Paradise is the third phase of humanity, realized as a balanced connection between artifice and nature.
The Third Paradise is the passage to a new level of planetary civilization, essential to ensure the survival of the human race. To this purpose we first of all need to re-form the principles and the ethical behaviours guiding our common life.
The Third Paradise is the great myth that leads everyone to take personal responsibility in the global vision.
The term “paradise” comes from the Ancient Persian and means “protected garden”. We are the gardeners who must protect this planet and heal the human society inhabiting it.
The symbol of the Third Paradise, a reconfiguration of the mathematical infinity sign, is made of three consecutive circles. The two external circles represent all the diversities and antinomies, among which nature and artifice. The central one is given by the compenetration of the opposite circles and represents the generative womb of a new humanity.

www.terzoparadiso.org
In 2005 Third Paradise was presented at the 51st Venice Biennale in the exhibition “Inner Island: Art of Survival”, curated by Achille Bonito Oliva. The exhibition presented events, meetings and workshops with the participation, among others, of Gilberto Gil in the double role of musician and Brazilian Culture Minister.
The Third Paradise since 2005 has become a big collective oper-action, thanks to the collaboration between the Education Department of Castello di Rivoli – Museum of Contemporary Art and Cittadellarte: the concept has been applied in events and workshops attended by thousands of people – children and adults- in many cities, to bring a message of respect for nature and for urban spaces, through a creative involvement that places art at the center of a responsible social transformation. In symbolic form this collective action has been drawn from various recycled materials (rags, aluminum, etc) to call for an assumption of collective social responsibility and to reflect on issues of environmental sustainability.
From 2007, with the collaboration between Pistoletto and the musician Gianna Nannini, curated by Zerynthia – RAM Radioartemobile, the Third Paradise evolved into a multimedia work in progress. Live events, exhibitions both in Italy and abroad and online activities build up a platform of relations aiming to inspire and produce a social transformation both from a local and a global point of view by spreading the message/myth of the Third Paradise.

In 2010 Michelangelo Pistoletto wrote the essay "the Third Paradise", published by Marsilio Editori.
Buy the book from the online store of Cittadellarte
Starting from 2012 the Third Paradise reaches a new stage: Rebirth-Day, the worldwide day of change
From Rebirth-day manifesto:
It is time to begin the third stage, in which humanity will reconcile and unite nature and artifice, creating a new balance at every level and in every area of society: the Third Paradise (further information about the project).
The gestational process of Rebirth-Day, the first worldwide day of rebirth, has begun. We can all participate, with personal or group initiatives featuring proposals, actions and activities consistent with the process of responsible social change set forth in the Third Paradise. 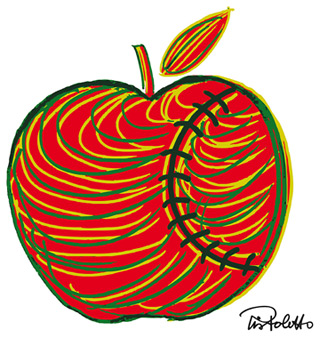 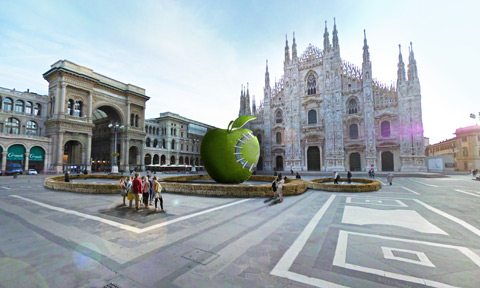 Sunday, May 3 at 10 am, at the opening event of "Via Lattea", the work will be shown to the citizens in the presence of Michelangelo Pistoletto, accompanied by a suggestive performance.
From May the 3rd to May the 18, 2015 Piazza del Duomo in Milan will change its face thanks to the "Third Paradise - The Updated Apple", a new work by Michelangelo Pistoletto with powerful visual and emotional impact, curated by Cittadellarte - Fondazione Pistoletto and made in collaboration with the FAI - Fondo Ambiente Italiano, with the sponsorship and support of the City of Milan and the patronage of Milan Expo 2015.
further information
www.lamelareintegrata.org
September 19th 2012 | 8.00 pm
Piazza Duomo, Milan
Michelangelo Pistoletto
the Third Paradise for the Italian Fashion Sustainability Manifesto 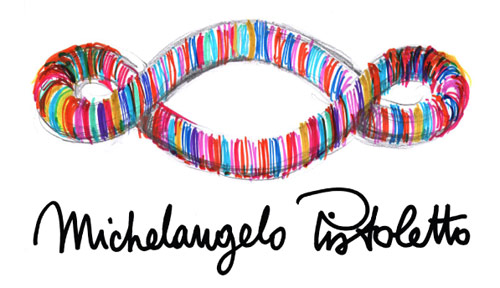 
On September 19,th 2012, at the opening of Fashion Week, in Piazza Duomo in Milan the artistic performance "The Third Paradise" by Michelangelo Pistoletto (further information).
The symbol of the Third Paradise by Michelangelo Pistoletto is recreated in Piazza Duomo with the help of one thousand students of fashion, art and design in Milan. A special live event that aims to encourage and promote a transformation of society through the dissemination of the message / myth of the Third Paradise.
Official video  by Gangvideo | Courtesy Camera della Moda di Milano 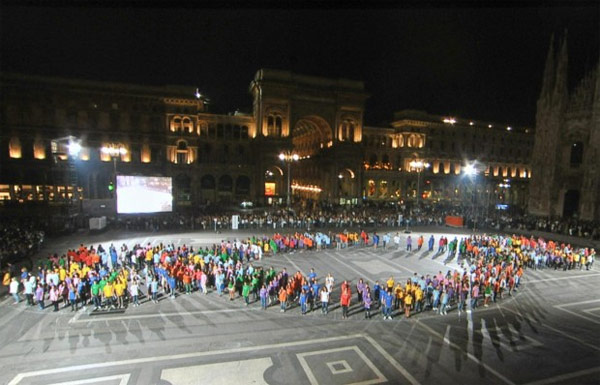 image from www.repubblica.it   |   view the gallery
May 27th 2010: in collaboration with FAI - Fondo Ambiente Italiano Michelangelo Pistoletto presents the Third Paradise as a huge land art work in the Bosco di San Francesco in Assisi.


Inner island: art of survival
curated by Achille Bonito Oliva, Venice International University, with the patronage of the Ministry of Foreign Affairs

M. Pistoletto (2005), The symbol of Third Paradise traced in San Servolo Island
"The island isn’t simply a geographical reality, but a symbolic one as well.
In the collective imagination, it synthesises the concepts and legends that art has always represented. Survival, return, departure, shipwreck, nostalgia and landfall are the principle interior aspects of an island yearnedfor by art in manifold forms.
(...)Thus Pistoletto shifts the collective of his “Cittadellarte” from Biella to the island of San Servolo, rendering it creatively part of a concrete dream, that of affecting not quantity, to which the simple concept of survival is linked, but quality, through a collective work that acts on the forms of everyday objects. Pistoletto accepts a new identity, moving from individual to collective person in artistic creation, seizing the opportunity to transform the island of San Servolo into a factory of ideas, above all in permanent synchrony with the international university already residing there. Thus art throws off its Platonic external guise to take on an active identity, in full contact with real things.
As we can see through the productions disseminated scattered between Marseilles, Arles, Antwerp, Sarajevo, Beirut, Biella and other cities throughout the world, by Pistoletto and the others of his collective. We’ve seen Mediterranean tables, multi-faith chapels, doors like frames with “art and politics” written over, lagoon yachts with “love difference” written on their sails, ice-cream shop windows and red sofas, all works that confirm that Cittadellarte is here and fighting with us. San Servolo becomes the inner island that guards the treasures of being, having, willing and knowing.
Achille Bonito Oliva
San Servolo island hosts Cittadellarte with its mission "inspire a responsible transformation in the society through ideas and creative projects". 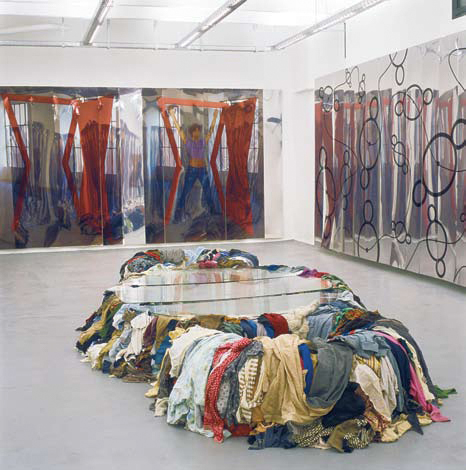 The collaboration between Pistoletto and Nannini, curated by RAM Radioartemobile, reshapes itself as an international music network open to musicians from allover the world and becomes Third Paradise / Mama - Free style Music.
At the National Centre for Contemporary Arts in Moscow, the exhibition is enriched by the presence of Testimonials: a number of personalities from the worlds of culture, science and art called to offer their aware adhesion and to dilate the circle of sharing that stems from the vibration of the Third Paradise accentuating its heterodoxy.
RAM radioartemobile presents The Third Paradise
From February 8th to April 28th 2007, at bunKerart in Milan.

The conceptual center of the exhibition is the New Sign of Infinity by Pistoletto that expands throughout the space on large sheets of aluminum in an infinite repetition.
The installation is completed with the Orchestra di stracci, and the “vocal sculpture” Mama by Gianna Nannini. The two works entwine, mix and embrace unwinding in syntony and sharing of thought: music becomes a vehicle of communication to translate into myth the concept expressed in the Third Paradise.

The essay by Michelangelo Pistoletto "the Third Paradise", published by Marsilio is now available online.

The Third Paradise is the new world.

The symbol of the Third Paradise unites the human community.

The Third Paradise is an evolutionary transition in which human intelligence finds ways to coexist with the intelligence of nature.